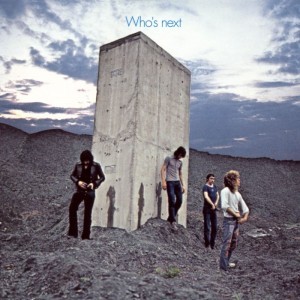 Who’s Next is the fifth studio album by English rock band The Who, released in August 1971. The album had origins in a rock opera conceived by Pete Townshend called Lifehouse as an attempt to follow Tommy. The ambitious, complex project did not come to fruition at the time and instead, many of the songs written for the project were compiled onto Who’s Next as a collection of unrelated songs. After difficulty with initial recording sessions at the New York Record Plant, events stabilized with the arrival of producer Glyn Johns, who worked on the finished album. The album featured the group’s first use of the synthesizer, particularly on the tracks “Baba O’Riley” and “Won’t Get Fooled Again”.

The album was a critical and commercial success when it was released, and has been certified 3× platinum by the RIAA. It continues to be critically acclaimed and has been reissued on Compact Disc several times, adding additional material intended for the Lifehouse project.
The album had its roots in the Lifehouse project, which Pete Townshend has variously described as intended to be a futuristic rock opera, a live-recorded concept album and as the music for a scripted film project. The project proved to be intractable on several levels and caused stress within the band as well as a major falling out between Townshend and The Who’s producer Kit Lambert. Years later, in the liner notes to the remastered Who’s Next CD, Townshend wrote that the failure of the project led him to the verge of a suicidal nervous breakdown.

After giving up on recording some of the Lifehouse tracks in New York, The Who went back into the studio with new producer Glyn Johns and started over. Although the Lifehouse concept was abandoned, scraps of the project remained present in the final album. The introductory line to “Pure and Easy”, which Townshend has described as “the central pivot of Lifehouse,” shows up in the closing bars of “The Song Is Over”. An early concept for Lifehouse featured the feeding of personal data from audience members into the controller of an early analogue synthesiser to create musical tracks. It was widely believed that inputting the vital statistics of Meher Baba into a synthesiser generated the backing track on “Baba O’Riley”, but in actuality it was Townshend playing a Lowrey organ. A primary result of the abandonment of the original project, however, was a newfound freedom; the very absence of an overriding musical theme or storyline (which had been the basis of The Who’s 1969 project, Tommy) allowed the band to concentrate on maximising the impact of individual tracks.

Although he gave up his original intentions for the Lifehouse project, Townshend continued to develop the concepts, revisiting them in later albums. In 2006 he opened a website called The Lifehouse Method to accept personal input from applicants which would be turned into musical portraits.

The album was immediately recognised for its dynamic and unique sound. The album fortuitously fell at a time when great advances had been made in sound engineering over the previous decade, and also shortly after the widespread availability of synthesisers.

Townshend used the early synthesisers and modified keyboard sounds in several modes: as a drone effect on several songs, notably “Baba O’Riley” and “Won’t Get Fooled Again”, and as a playful noisemaker, sounding almost like a tea kettle whistle on “Song Is Over”. Townshend also used an envelope follower to modulate the spectrum of his guitar on “Going Mobile”, giving it a distinctive squawking sound that degenerates into a bubbling noise at the end of the song.

The album opened with “Baba O’Riley,” featuring piano by Townshend and a violin solo by Dave Arbus.[1] The violin solo was drummer Keith Moon’s idea. The song’s title pays homage to Townshend’s guru Meher Baba and influential minimalist composer Terry Riley (and is informally known by the line “Teenage Wasteland”). Other signature tracks include the rock ballad “Behind Blue Eyes”, and the album’s epic closing song, “Won’t Get Fooled Again.”