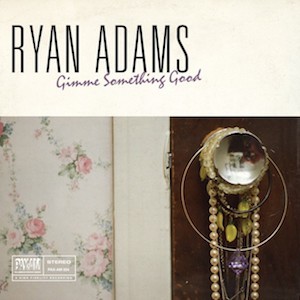 Ryan Adams is the forthcoming 14th studio album by American singer-songwriter Ryan Adams, due for release on 8 September 2014 in Europe and 9 September 2014 in the United States on PAX AM. The album is preceded by the single “Gimmie Something Good”.

Following the release of Ashes & Fire (2011), and its successful accompanying tour, Adams returned to the studio in 2012 to record its follow-up with producer Glyn Johns. The planned album was set to include “more orchestral flourishes” that its primarily stripped-back predecessor.[1] In March 2013, Adams debuted two new songs, “Where I Meet You In My Mind” and “In The Shadows”, at a one-off live performance. The concert was Adams’ first with a backing band since the dissolution of The Cardinals in 2009. The band included Ashes & Fire session musicians, Benmont Tench (keyboards) and Jeremy Stacey (drums); former Cardinals member Cindy Cashdollar (pedal steel); Adams’ regular collaborator Ethan Johns (guitar) and Don Was (bass). This performing line-up were reported to be the musicians performing on Adams’ forthcoming studio album.

News of the album’s recording and eventual release began to fade, with Adams becoming a prolific record producer at his studio PAX AM. During this time, Adams produced Fall Out Boy’s PAX AM Days (2013), Ethan Johns’ The Reckoning (2014), and Jenny Lewis’s The Voyager (2014). In 2013, Adams also formed a punk rock band entitled Pornography, releasing a limited edition EP, 7 Minutes in Heaven, for Record Store Day 2013.

In 2014, it was revealed that Adams had scrapped the Glyn Johns-produced successor to Ashes & Fire, and had started afresh at his studios, PAX AM, with his recording partner Mike Viola, and bass guitarist Tal Wilkenfeld, who had previously performed in Jeff Beck’s band.