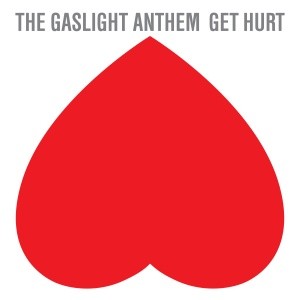 Get Hurt is the fifth studio album by American rock band The Gaslight Anthem, released in the UK on August 11, 2014, through Virgin EMI, and in the United States on August 12, 2014, through Island Records. It is the first full-length studio album since the band’s 2012 release, Handwritten, and marks their first album on Island Records, which absorbed the band and its previous label, Mercury Records.

Produced by Mike Crossey and inspired by vocalist and guitarist Brian Fallon’s divorce from his wife of ten years, the band was influenced by artists whose albums represented “career shifts”.

The band announced on July 4, 2013, via their Tumblr site, that they were “Working on new songs for a new Gaslight Anthem album in 2014.” Fallon cites Pearl Jam’s No Code album as an influence and inspiration for the upcoming album.

In an interview with Rolling Stone published May 23, 2014, Fallon described the album as “completely different than anything we had ever done before. Instead of going that extra step of just adding some organ or some background vocals, this time we actually really changed up a lot of the sounds.”

In a posting on the band’s official website fans were informed to “Get ready for some things you’ve never heard this band do!” On March 10, 2014, the band entered Blackbird Studios in Nashville, TN to record their fifth studio album. The band stated on April 14 that they had arrived at the “last week in the studio” of recording the album.