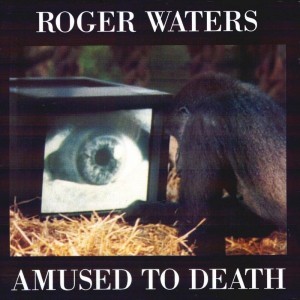 Amused to Death is a concept album, and the third studio album by former Pink Floyd bassist, song writer and composer Roger Waters. It was released in 1992.

The album title was attached to material that Waters began working on during the Radio K.A.O.S. tour. It was several years before the album was released and it is unknown how much the material was changed in the interim.

In Neil Postman’s book The End of Education, he remarks on the album: “(…) Roger Waters, once the lead singer of Pink Floyd, was sufficiently inspired by a book of mine to produce a CD called Amused to Death. This fact so elevated my prestige among undergraduates that I am hardly in a position to repudiate him or his kind of music.”

Waters stated in an interview with Rockline on 8 February 1993 that he wanted to use samples of HAL 9000 from 2001: A Space Odyssey on the album. Stanley Kubrick, the director, turned him down on the basis that it would open the door to many other people using the sound sample. Others think that Kubrick refused because Pink Floyd had not allowed him to use music from Atom Heart Mother in his film A Clockwork Orange. Waters has since then used audio of HAL describing his mind being taken away when performing the song live (as an intro, specifically during his “In the Flesh” concert tour, after Kubrick’s death).