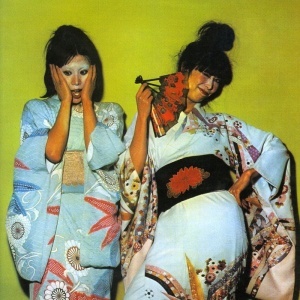 Kimono My House is the third album by American rock band Sparks. The album was released in May 1974 and is considered to be their commercial breakthrough album. Its title is a pun on the song “Come on-a My House,” made famous by Rosemary Clooney.

In 1973, prior to the recording of the album, the brothers Ron and Russell Mael had accepted an offer to relocate to the United Kingdom in order to participate in the glam rock scene. The previous lineup consisting of Earle Mankey, Jim Mankey and Harley Feinstein were replaced with British musicians: Martin Gordon, Adrian Fisher and Norman “Dinky” Diamond were hired to play bass, guitar and drums respectively. The group signed a record contract with Island Records and recorded Kimono My House in 1974. Although the Mael brothers had wanted Roy Wood to produce the album, he was unavailable, so Muff Winwood was hired as producer. Winwood remained with the group to produce the follow-up album Propaganda later in 1974.

Musically, Kimono My House represented a shift in sound and a focusing of Ron Mael’s songwriting (now the indisputable lead songwriter). Sparks’ two albums with the Mankey brothers had been diverse albums that featured a number of different styles, such as a cover of Rodgers and Hammerstein’s “Do-Re-Mi,” “Here Comes Bob,” which was performed by a small string section, and “The Louvre,” which mixed both English and French lyrics.

The new album embraced the more pop oriented side of the Mael brothers’ songwriting, which had previously been evident in songs such as “Wonder Girl” and “High C.” Now, backed by the new British line-up and boosted by Muff Winwood’s simpler production, the songs were more focused. The album slotted in with the current popularity of glam rock—which was dominating the charts—in particular, the more experimental and electronic sound of Roxy Music and David Bowie. Lyrically, the songs remained unusual and humorous. The great number of words filled with pop-culture references, puns and peculiar sexual content sung often in falsetto by Russell Mael set Sparks apart from other groups.

The particularity of their sound, which matched pop songwriting with complex lyrics, defined the group to their UK audience. Integral to the sound was Adrian Fisher’s bluesy guitar playing and Martin Gordon’s sonorous Rickenbacker bass. This was aided and abetted by the physical presence of the group. Ron and Russell milked their peculiar image: Ron’s toothbrush moustache, reserved wardrobe and usually silent demeanor sat in diametrical opposition to his younger brother’s long curly hair and energetic and flamboyant stage manner. Taken together, the sound and look of the group caused a sensation, producing what seemed to the mass audience to be an “overnight success.”

Kimono My House became a popular release, reaching #4 on the UK Albums Chart. The single “This Town Ain’t Big Enough for Both of Us” was a surprise hit and reached #2 in the UK Singles Chart. It was held off the top spot by The Rubettes’ bubblegum pop song “Sugar Baby Love,” which remained at #1 for four weeks. Sparks’ second Island era single, “Amateur Hour,” reached the top ten in the UK later that summer.

Outside the UK, Kimono My House and its singles made a significant impact across Europe, notably in Germany, where both singles reached #12. In the US, the album reached #101 on the Billboard 200. The group’s two Bearsville albums had garnered critical praise but few sales. The only significant chart performance had been for “Wonder Girl,” which had been a minor regional hit and had crept into the lower reaches of the Cashbox chart at #92.