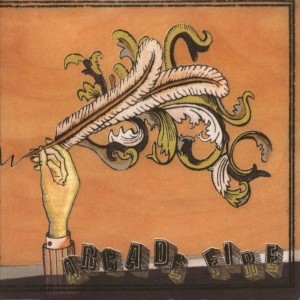 Funeral is the debut album by the Canadian indie rock band Arcade Fire, released on September 14, 2004 in North America by Merge Records and on February 28, 2005 in Europe by Rough Trade Records. It was given its title because several band members had recently lost members of their families: Régine Chassagne’s grandmother died in June 2003, Win and William Butler’s grandfather (swing musician Alvino Rey) in February 2004, and Richard Reed Parry’s aunt in April 2004.

Preliminary recordings for Funeral were made during the course of a week in August 2003 at the Hotel2Tango in Montreal, Quebec, and the recording was completed later that year all in an analogue recording format.

The album produced five singles. The most successful, “Rebellion (Lies)”, peaked at #19 on the UK Singles Chart. The album was nominated for a Grammy Award in 2005 for Best Alternative Music Album. It received wide critical acclaim and topped many year-end and decade-end lists. According to the website Metacritic, the album had the second most appearances on end-of-decade Top 10 lists, only behind Radiohead’s Kid A. In the updated version of Rolling Stone’s 500 Greatest Albums of All Time, it was ranked at #151.

Funeral has received almost unanimous praise from music critics, and is hailed as a modern classic. At Metacritic the album has received an average score of 90, based on 30 reviews. It is listed at number 24 on Metacritic’s list of highest scored albums of all time. AllMusic reviewer James Christopher Monger gave the album a rating of five stars out of five. He described it as “brave, empowering, and dusted with something that many of the indie-rock genre’s more contrived acts desperately lack: an element of real danger.” Rock critic Robert Christgau gave the album an A−, saying that Funeral was “…too fond of drama, but aware of its small place in the big world, and usually beautiful.” Pitchfork Media gave the album a 9.7 out of 10 rating, and ultimately ranked the album #2 on their Top 200 Albums of the 2000s list, after Radiohead’s Kid A.

Drowned in Sound also highly praised Funeral. Reviewer Jesus Chigley called the album “…empowering and hopeful and euphoric all at once”, saying that “it says everything there is to say about mortality and it does it in 10 tracks.”[12] Stylus’s Josh Drimmer gave Funeral an A, calling it “celebratory, emotionally rich and life-affirming”. Tiny Mix Tapes gave the album five stars out of five; “Funeral,” the reviewer wrote, “is like nothing you’ve heard before, and altogether familiar.” Dave Simpson of The Guardian called it “one of the year’s best already, by a mile.”[15] Zeth Lundy of PopMatters complimented Funeral on its eccentricity, calling it “bizarre at turns and recognizable elsewhere, equally beautiful and harrowing, theatrical and sincere, defying categorization while attempting to create new genres.” Entertainment Weekly put it on its end-of-the-decade “best-of” list, saying, “Funerals are generally somber affairs, but the Canadian indie rockers’ emotionally charged 2004 debut mostly just made us smile. And, okay, mist up a little.”

The album was also listed in the book 1001 Albums You Must Hear Before You Die.

The album is certified Gold by the Record Industry Association of America for over 500,000 copies sold in the US.