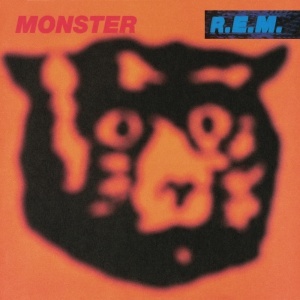 Monster is the ninth studio album by the American alternative rock band R.E.M., released in 1994 on Warner Bros. Records. Co-produced by the band and Scott Litt, Monster was an intentional stylistic shift from the group’s preceding albums, Out of Time (1991) and Automatic for the People (1992), consisting of loud, distorted guitar tones and simple song arrangements. Singer Michael Stipe’s lyrics dealt with the nature of celebrity, which he sang while assuming various characters. Led by the single “What’s the Frequency, Kenneth?”, Monster debuted at number one in the United States. The band promoted the record with its first concert tour since 1989.

Early in 1993, the members of R.E.M. convened a four-day meeting in Acapulco, Mexico, to devise a plan for the next two years. The group settled on a plan for 1994 through the end of 1996, which included recording a new album and touring behind it. Drummer Bill Berry was particularly eager to tour (which the band had not done since 1989), and was insistent that the album “rock”. The band agreed that after Out of Time and Automatic for the People they did not want to make another slow-paced album.

Later that year R.E.M. began recording its ninth album. Preproduction took place at Kingsway Studio in New Orleans under the supervision of Mark Howard, who had previously worked on Automatic for the People. The band wrote 45 songs for the record, including “a whole album’s worth of acoustic stuff” that the band demoed, according to guitarist Peter Buck. Howard recalled that the sessions were more experimental for the band; he said, “The bass had a tremolo sound on it. It was a more inventive session for them.” The studio did not have a control room, so Howard recorded Michael Stipe singing lyrical ideas while lying on a couch. Howard said, “Being able to put those vocals down helped him write the lyrics to a lot of songs on Monster.” Once the sessions were complete, Howard played the recordings to co-producer Scott Litt, who had worked with the band since their fifth album Document.

In February 1994 the band moved to Crossover Soundstage in Atlanta, Georgia. At Crossover, most of the album’s basic tracks were recorded live, as if the band were playing in concert. Litt said, “I thought since they hadn’t toured in a while, it would be good for them to get into that mind-set–you know, monitors, PA, standing up”. The sessions were hampered by a number of events, including Berry and bassist Mike Mills falling ill on separate occasions, Buck and Stipe leaving to visit family members, and the deaths of Stipe’s friends River Phoenix and Kurt Cobain.[4] The band wrote and recorded “Let Me In” in tribute to Cobain, and dedicated the album to Phoenix, whose sister Rain sang background vocals on “Bang and Blame”.

In late April 1994, the band relocated to Criteria Studios in Miami, Florida, but recording was disrupted because Stipe suffered from a tooth abscess that required medical attention. Unlike previous album sessions, by the time production had moved to Ocean Way Recording in Los Angeles, California, the band was behind schedule. Litt attributed the delay to recording live at Crossover, which lengthened the mixing process; he told Rolling Stone, “We’re trying to figure out how raw to leave it and how much to studiofy it.” At the same time, Stipe was still writing when the band was supposed to be mixing the record. Tension arose between the band members, who were staying in different locations in Los Angeles and would rarely be in the studio at the same time. Tensions came to a head when the group was recording at Louie’s Clubhouse, Litt’s home studio in Los Angeles, where years later Stipe recalled, “We broke up . . . We reached the point where none of us could speak to each other, and we were in a small room, and we just said ‘Fuck off’ and that was it.” The group had a meeting to resolve its issues; Mills told Rolling Stone, “We have to begin working as a unit again, which we haven’t been doing very well lately.”