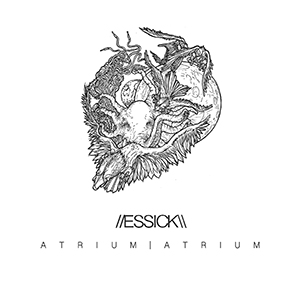 Musicians Ravi Das and Freddy MacDougall met in high school and later became close friends, bonding over a shared appreciation of Battles, BADBADNOTGOOD and Seekae, but their first foray into playing music together came much later when Freddy’s band was looking for a bass player. That band dissolved not long after and Ravi went back to his bedroom project Cherry Spliff.  Ravi completed a track ‘Atriums’, Freddy instantly fell in love with it, and the collaboration that is Essick was born.

Over the next year and a half, the pair worked tirelessly to hone their songwriting skills before entering Bedlam Studios in late 2013 where they spent five days working with producer Steve Kempnich. They enlisted the help of Brock Weston to replace most drum machines with his swift snare rolls and powerful tom whacks, bringing added  energy and attitude to each song. Utilising two synthesisers (specifically a Prophet 08 and a Moog Voyager) and countless guitars to fill in the sound, Kempnich’s production gives each instrument and vocal sound more than enough room to breath.  Ravi and Freddy had created the album they set out to produce and were ready to take it to a wider audience.

On the 12th of November 2013, less than a month after the album’s completion, Ravi Das passed away in a horrible drowning accident. A promise was made to Ravi’s family that his music would be released for the world to hear.

Opener ‘Atriums’ sets the tone for the record, its delayed guitar and frenetic drum patterns are present throughout all eleven tracks.  Album centrepiece ‘Indica’ begins with a muted guitar before haunting vocals creep in below a simple melody. Essick’s first single ‘Ghost Towns’ brings the energy to fever pitch, teasing the chorus hook early on before revealing it full force like a bull seeing red.

Essick, a mongrelised version of James Blake and Deep Sea Arcade on dexamphetamines, are primed and ready to release this masterful collection of songs into the world and let them spread their wings.