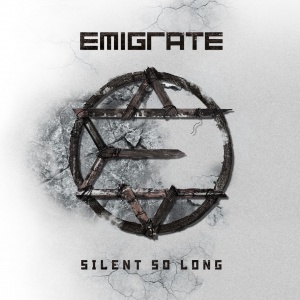 If you have never heard of Richard Z Kruspe you are not a Rammstein fan.  As Rammstein guitarist he made his first Emigrate album in 2007. This soloproject made it possible for him to fullfill his dream to put his own ideas for songs on an album not related to Rammstein.

Now in november 2014 his second album Silent so Long is out. Yes, we had to wait for 7 years.
On this album there are guest appearances by Lemmy Kilmister, Jonathan Davis, Marilyn Manson, Peaches, Frank Dellè and Margaux Bossieux.

The opening of the album is the first single Eat you Alive. After a short intro Richard rocks his guitar and the mind is set for the rest of the album.  Frank Dellè puts in some nice raps at ¾th of the song.

Lemmy gives his best voice in Rock City and speeding up the guitars. Marilyn is himself in Hypothetical, you can here him swirling on the stage in this song.
Sure you can hear influences of Rammstein in the album but it is absolutely not a Rammstein album.

Get Down is a more industrial song and if you buy the Limited Edition of the album, then you will even hear a more EBM like version. I can write about all the songs here but just buy itand enjoy it. And don`t forget to visit the Emigrate website, http://www.emigrate.eu/ , watch the making of Eat you Alive video, a great masterpiece and the webisode of Silent so Long.