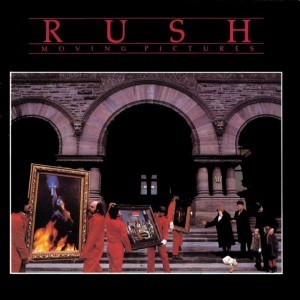 Moving Pictures is the eighth studio album by Canadian rock band Rush. It was recorded and mixed from October to November 1980 at Le Studio located in Morin Heights, Quebec, Canada, and released on February 12, 1981.

Moving Pictures became the band’s biggest selling album in the US rising to #3 on the Billboard charts and remains the band’s most popular and commercially successful studio recording to date. The album was one of the first to be certified multi-platinum by the RIAA upon establishment of the certification in October 1984, and eventually went quadruple platinum.

The album cover art is a visual pun of movers physically carrying paintings, while several songs from the album are connected to motion pictures, with “moving pictures” meaning movies. This second meaning is explicitly shown on the back of the album, where a movie crew is seen filming the scene from the front cover. A third meaning is taken from bystanders who are watching the movers and are visibly emotionally moved by the paintings, making them “moving pictures”.

K-Rock is 'No Commercials - just great music..' Help us to stay commercial free ...