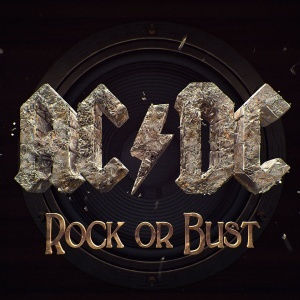 Rock or Bust is an album by Australian hard rock band AC/DC that was released on December 2, 2014. It is the band’s fifteenth internationally released studio album and the sixteenth to be released in Australia. It is the shortest studio album ever released by the band; at under 35 minutes, it is two minutes shorter than their previous shortest album, Flick of the Switch, released in 1983.

The group released the debut single from the album, titled “Play Ball”, on 7 October 2014. The song has been a commercial success, reaching the top 40 charts in various nations such as France (at #39) and Switzerland (at #19).
Released on 28 November 2014 in Australia and due on 2 December 2014 elsewhere, Rock or Bust marks the band’s first original recordings since 2008’s Black Ice.

Rock or Bust is the band’s first album without founding member and rhythm guitarist Malcolm Young, who left the band in 2014 for health reasons. Malcolm’s departure was later clarified by the band and their management, saying that Malcolm was officially diagnosed with dementia and will possibly never play again.

Before the album was officially announced, Brian Johnson admitted that it was difficult to make the album without Malcolm Young. He brought about the idea that the album could be called Man Down, but believed the title felt too negative towards Malcolm’s situation and overall health.

On 6 November 2014, drummer Phil Rudd was arrested for attempting to procure the murder of two men. AC/DC made a statement the same day: “We’ve only become aware of Phil’s arrest as the news was breaking. We have no further comment. Phil’s absence will not affect the release of our new album Rock or Bust and upcoming tour next year.” It is not yet clear whether Rudd will remain with the band or not, or who might be his replacement.[12] The attempted procurement charge against Rudd was dropped the following day; charges of possession of methamphetamine and possession of cannabis and a charge of threatening to kill remained.