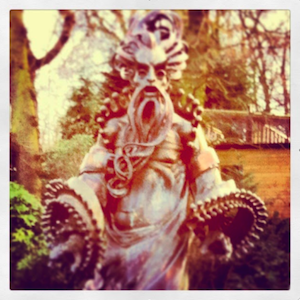 Prior to forming the band, all three members spent time honing their musicianship and songwriting skills with other bands on the vibrant Manchester music scene.  As a result they have known each other for years, sharing similar passions and frustrations, influences and experiences.  Writing came easily and before the trio knew it, they had an album’s worth of material ready to record at Eve Studios in Bredbury, one of Manchester’s best kept secrets.

Los Trasgos Muertos are influenced by a range of musicians from Billy Childish and Deep Purple to Ty Segall, The Beatles and Prince.  This eclecticism inspired them to find their own sense of individuality; they strive to produce records with a strong melody and hook, substance over style, but it’s important to them that each track captures their sense of fun too.

Gareth (Bass/Vox/Organ) describes their sound as ” Loud music for bodies in small hot sweaty rooms, this is physical music.”

The Band in Their Own Words…

Slumbering over decades, awoken by the call of screaming hordes, ‘Los Trasgos Muertos’ were born in blood. The blood running through 5th chords, trashy cymbal crashes and broken amps.

Captain Reed, the endless traveller, has known many names. His rage built over millennia broken and fragmented, unknowingly cradled and forged into a mirror focused on the world. Von Beek has been with us all, the knotted charm we prayed to when all else was hopeless, a blank vision when our eyes were blackened by doubt. Il Fleishe is the collector, master of possession. Within his realm, time was twisted and shaped into endless caverns where souls were left to rot over millennia.

And so the three of us found ourselves in the storm, and lo! ‘Los Trasgos Muertos’ became flesh. Taking Garage/Psyche Rock and twisting it to our own devices with our fleshless skeletal fingers, we traverse the wilderness, a trinity, savaging audiences and all in our path.  Join us!

K-Rock is 'No Commercials - just great music..' Help us to stay commercial free ...